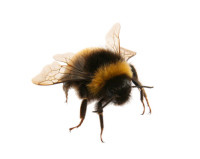 Technically they are Africanized bees, a hybrid mix of the western honeybee, Italian honey bee, Iberian honey bee and east African lowland honey bee. They were first introduced in Brazil in 1956 as an attempt increase honey production. In 1957 twenty-six swarms escaped quarantine and as the bees were more aggressive, and defensive of their territories, stories of attacks began fueling urban legend and myth.

To date the bees that have been documented to have chased people and livestock for more than a quarter mile. They are also credited with more than one thousand deaths. And as they have slowly moved north arriving in North America, the legends grew. The first Africanized bees in the United States were discovered in 1985 at an oil field in California’s San Joaquin Valley. It was later determined that the bees had not migrated north but instead had arrived in a load of oil drilling pipe delivered from South America. In 1990 colonies of the aggressive bees were discovered in Texas. Four years later additional colonies were found in the Patagonia area of southern Arizona and in Tucson. At that time a study determined that only 15 percent of the bees had been Africanized. By 1997 that number had risen to 90 percent.

Contrary to popular belief, the venom of an Africanized bee is roughly the same as that of a European honey bee. However, the Africanized strain of been tends to sting in far greater numbers. As a result the deaths from these attacks are more numerous. Interestingly complications from Africanized bee stings are usually not caused from allergies but from the number of stings that induce serious side effects such as skin inflammation, headaches, edema, nausea, diarrhea and vomiting and respiratory distress. Still, attacks remain relatively rare.

The 1970s were an era of epic disaster movies; The Poseidon Adventure, Earthquake, Towering Inferno, and Andromeda Strain to name but a few. The “killer” bees were ideally suited as a subject for such a film and in 1978 The Swarm adapted from a novel of the same name by Arthur Herzog was released. It was directed by the king of disaster epic Irwin Allen and featured an all star cast that included Michael Caine, Richard Widmark, Richard Chamberlain, Olivia de Havilland, Ben Johnson, Patty Duke and Slim Whitman.

As with most of the disaster epics the story line is based on fear inducement more than fact. The story begins with an investigation about a civilian van driven onto a restricted military base. It turns out to be Dr. Bradford Crane (Michael Caine), the only survivor of a bee attack. Meanwhile two military helicopters are swarmed by the “killer” bees and explode, and a family is attacked. The body count grows as the scientist battles the military in search of a solution. And of course there is an underlying love story. The movie ends with destruction of the killer swarm and a pithy comment from Dr. Crane, “if we use our time wisely, the world just might survive.”

Unlike in The Swarm, you don’t need a military solution to a problem with bees of any kind, even the Africanized version. You just need the experts at Baron Services provide solutions for all of your pest control needs.