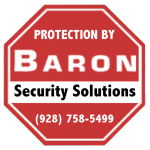 Crime rates and home security rate high on the list of most popular subjects to discuss. There is little we can do about the former. That is not the case with home security. There are a staggering array of options available when it comes to protecting your home, family or property. That in itself is a problem and it is why I recommend leaving this to the professionals at Baron Services.

Have you ever given thought to how home security has changed over the years? The modern era for home security dates to 1861. That was the year an American inventor named Linus Yale Jr. developed a compact cylinder pin-tumbler lock. As a simplistic explanation, the key turns a cylinder that rotates an attached arm that shifts the cylinder and causes linear motion of a bolt. To this day the cylinder lock remains the most popular form of basic security. Yale, however, did not dream up this brilliant creation on his own. In fact the principles are actually rooted in ancient Egypt.

As you may have guessed the earliest home security wasn’t really security at all. Simple cords or ropes made of rush and fiber we sued to secure a door or window. In 2000 B.C. Egyptian craftsman began developing mechanical locks made of wood and and clay. The Romans took the idea a step further with the creation of metal locks that were also works of art in 870 A.D. Even the keys were ornate with some created in the shape of animals, fish, flowers and birds.

Fast forward to 1853 for the next step in the evolution of home security. This was he year that Augustus Pope of Boston tested a prototype electro-magnetic alarm system in Boston. As with many modern electric systems, when an electrical circuit was closed as a result of a door or window opening. It was a battery operated system with a flow of current that would cause the system’s magnets to vibrate and a hammer to strike a brass bell. Once activated it would continue ringing until deactivated, or the battery went dead.

Edwin Holmes took Pope’s idea to the next level, literally. Holmes bought the rights to Pope’s system and established an electrical alarm system company, a first. Holmes not an inventor. His genius was in marketing and in securing investors. As electricity was relative novelty in the 1870s, he published the names of his prominent “burglar alarm telegraph” customers in New Yorker magazine to alleviate concerns. Then he created a brand out of the system. Next he connected his customers’ alarm systems to a central station using the New York City telephone network.

Edwin Calahan established the American District Telegraph in 1871. Brilliantly, Calahan had divided New York City into districts linked to a central monitoring station. The innovative system could used to alert homeowners of a burglary as well as notify fire or police departments. His emergency call boxes became standard for emergency and messenger services by the late 1880. With success of the company he expanded to other cities including St. Louis, Chicago, Baltimore, Cleveland, Pittsburgh and Philadelphia.

In the 19th century these security systems were deemed innovative. Today they are archaic. When it comes to home security, especially in this age of rapidly changing technological innovation, things change fast. And that is why, for peace of mind, it is best to turn to the professionals at Barons for your home security needs.