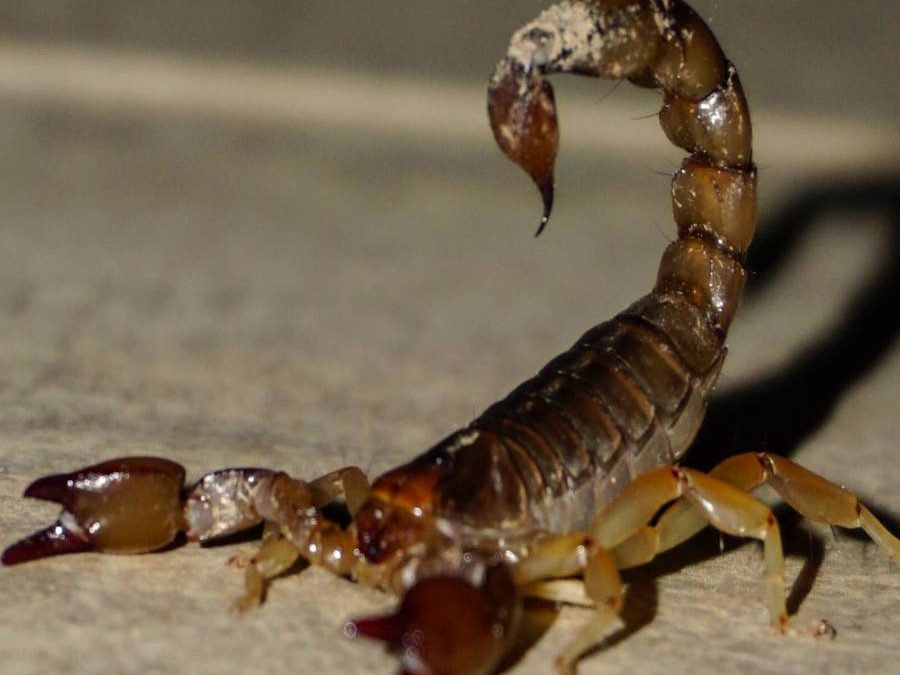 Scorpions are ancient creatures. Fossilized specimens have been found In coal deposits from the Carboniferous Period. Paleo biologists estimate that scorpions in one form or another have existed for nearly 450 million years.

They are also one of the deserts most dangerous species. The venom that is used to subdue its prey and in the mating process a complex neurotoxin. The composition, toxicity, and action of the venom varies from species to species.

A variety of scorpion species are found in the lower, dry and hot elevations of California, Arizona, New Mexico and Texas. Though painful, with but one exception the sting is generally not life threatening. That one exception is the bark scorpion, common in the Colorado River Valley.

But also found in the area are other species. These include the stripe tailed scorpion identifiable by the brown strips on the body. The name tells you everything needed to identify the Arizona hairy scorpion.

Scorpions are nocturnal. They prefer to hide during daylight hours. And that is why it is unwise to put your hand under rocks, logs or in cracks. Some species will use abandoned burrows.

There is a benefit to having scorpions on the property. They are predatory. So, their diet consists of all types of insects, spiders, centipedes and even other scorpions. Large scorpions have been found feasting on snakes, small lizards, and even mice.

Still, it is a good idea to keep the home and yard scorpion free. Likewise with various species of spiders, bees, and ants. And these too are common dwellers in the deserts of northwestern Arizona.

The most worrisome type of bee is an invasive species. Africanized honey bees, ominously referred to as killer bees, arived in Arizona from their native South Africa years after being imported into Brazil by scientists working to breed a bee suited for the jungle tropics.

After escaping quarantine in 1957, they began breeding with local Brazilian honey bees and dominating hives. Within a decade they were expanding their range by an estimated two hundred miles each year.

Their reputation for aggressiveness, and their moniker killer bee, is well deserved. They have viciously attacked people and animals that have entered a hives territory. These attacks have ledd to severe injury and even death. Even something as simple as noises or vibrations from vehicles, music, and air conditioners can trigger an attack.

The venom of their sting is not any more potent than native honey bees. The danger is that Africanized bees attack in swarms and will pursue. Distrubed hives or colonies can remain agitated for more than twenty four hours. And in an agitated state they will attack people or animals as far as a quarter mile away.

But none of these pests or threats are cause for worry. Baron Services in Bullhead City, Arizona ar tri state pest control specialists. They have been providing professional service to the Colorado River Valley for decades.