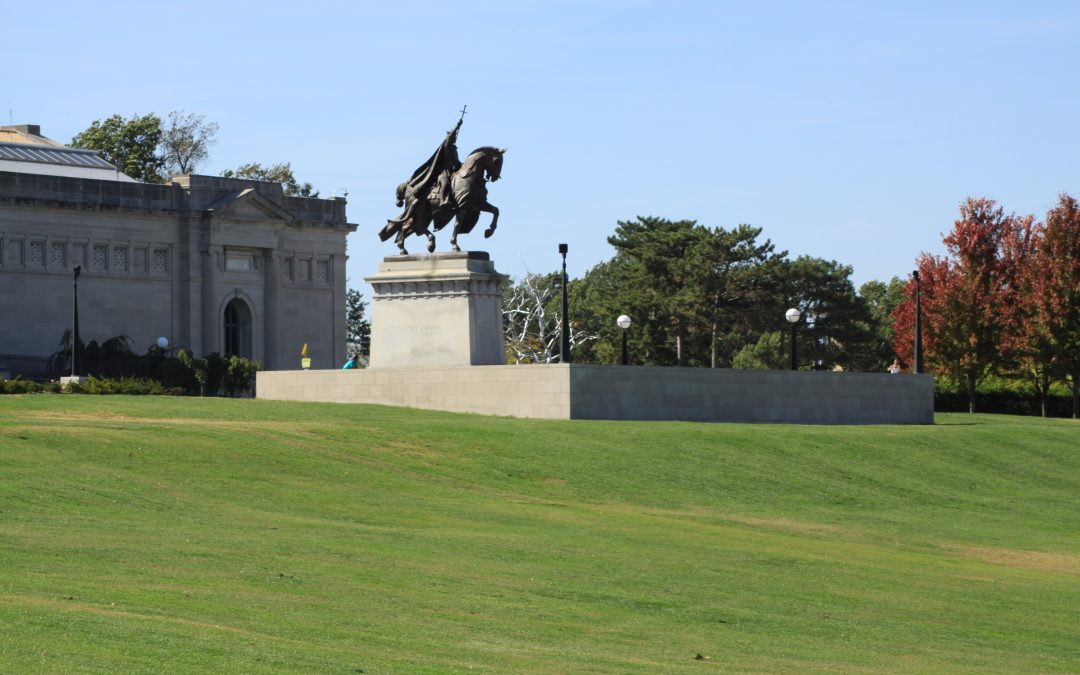 With few exceptions cities in the United States sprang from the wilderness as rustic frontier villages. In the years that followed they evolved with a sort of loosely controlled chaos, especially in the west with cycles of boom or bust. And with the dawning of the industrial revolution they became gritty, toxic tightly packed urban centers.

St. Louis built on the ruins of an ancient Mississippian Culture complex of cities with its location on the Mississippi River became an industrial powerhouse in the mid 19th century. And in the years following the Civil War the city became known for opportunity, for being an ideal location to establish a factory, and for its foul smelling air.

Public green spaces had been an integral component in European city planning for centuries. With establishment of New York’s Central Park in 1853 urban planning in America was transformed. Now the perception of a healthy rural setting could be used to enhance the livability or a congested urban center.

Cities were quick to adapt the trend in an effort to present the impression of being modern and progressive. St. Louis was no exception.

In 1874 the Missouri legislature approved funding to establish three parks in St. Louis County. The largest was to be carved from thick virgin forest west of the city, hence the name Forest Park.

With the parks acquisition by the city in 1875, planners immediately set to wok on its development as well as the creation of infrastructure that would allow for easy public access. The Wabash railroad extended a line to the northwest corner of the park which was a twenty minute ride from downtown.

Within one short year the park was radically transformed into a landscaping and engineering wonder. Roads and bridges were built. Streams were diverted into underground canals for improved control and linked to artificial lakes. Planned landscaping created open spaces and the illusion of forested wilderness that was easily maintained.

Officially dedicated on June 26, 1876, Forest Park was designed by Maximillian G. Kern, a gifted landscape gardener. Initially his focus was on the eastern portion of the park. Winding drives and waterways were built. Pavilions, bandstands, and picnic areas were built.

Projects were expanded and a zoo was added in 1890. The next stage in the parks evolution came in 1897 with establishment of an Amateur Athletic Association in St. Louis. The organization built a clubhouse, tennis courts, baseball diamonds and a 9-hole golf course.

Then a herd of buffalo, elk, and dromedaries were added to zoo. This facility was further expanded with construction of exotic animal houses and bear pits in 1899 and 1901.

Reflecting the city’s efforts to present itself as a progressive community, the first fine art museum opened in 1881. A decade latter an expansive new museum was built in Forest Park.

The centennial of the Louisiana Purchase provided the momentum to develop the park that had know outgrown Central Park in size into a showpiece. When Forest Park was selected as the site for the 1904 World’s Fair the stage was set.

In the 21st century the expansive park bordered by an early alignment of Route 66 and with many buildings still in place from the world’s fair and the exposition is the pride of St. Louis. It is also a masterpiece of urban landscaping.

You may not have the inclination or money to create an urban paradise such as Forest Park in the Colorado River Valley. However, with assistance from the professionals at Baron Services you can transform your home into a desert oasis.